I didn’t think I would ever say these words, or that I would say them while waiting for the Olympic diving, but I think I could actually miss the Olympics once they finish on Sunday.

Before two weeks ago the thought of sport being on the TV filled with revulsion. Revulsion that demonstrated itself by watching something else on TV. As football clogged up the TV listings, knocking things like Eastenders and Coronation Street off kilter, my hatred of sport grew stronger. Like when Bellatrix Lestrange killed Sirius Black. I wanted to send football through the Veil that was never explained and we’re supposed to just accept even though it’s a pretty massive plot point that’s left unresolved. The Olympics looked like it was going to be a gigantic waste of money that would bring thousands of people into a city that didn’t seem ready for the influx of people. But, as the Closing Ceremony is tomorrow, everything has been gone smoothly.

This is the eighth Olympics during my lifetime, and I’ve never wanted to see one, happy to watch anything else than the boring commentary about weird rules. I missed the whole Zola Budd business, all of the Cold War shenanigans in the late 80s and all the horribly coloured lycra of the 90s, and whatever Dame Kelly Holmes is famous for. I missed it, and I didn’t care. I was happy not knowing. There were more important things to think of, like when Neighbours was coming back from the Summer Break and whether secondary school was actually like Grange Hill (it was, but only because it was before drugs became a whole ‘thing’ and it was what actors in leather jackets did). 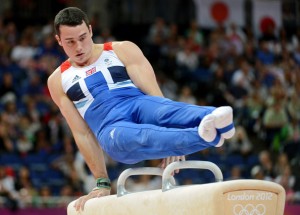 This year was different though. This year I was slapped in the face with divers wearing tiny trunks and throwing themselves from diving boards, men bounding around a large mat in skin tight lyrcra, and men in leotards running stupid amount of distances. And every minute was absolutely amazing. My stomach churned as Kristian Thomas ran towards the pommel horse, soared as Greg Rutherford jumped a crazy distance (and then made himself sound like a right prick afterwards). And thats before you consider what Bradley Wiggins and Mo Farah achieved.

It wasn’t just the successes that made it for me though. There were the hilarious names, like Eric Shen, and Robert Grabarz. There was Claire Balding’s brilliant commentary. There was actually excelling at sports that I didn’t think that we would be any good. And overall, the pride that I was watching a part of British history as we careened headfirst into possibly one of our most successful Olympics to date.

Maybe the Opening Ceremony broke me down to the very core of my being and indoctrinated a pride, between marvelling at an army of descending Mary Poppins and sobbing as six unknown athletes lit the Torch, that I haven’t experienced before, or maybe I was swept up in Olympics Fever and would have sat through Caitlin Moran in the 100 second backcomb and still been engrossed if we were up for a medal.

The camaraderie that everyone felt as we all faced uncertainty over the Olympics’ success was palpable. We knew it could all go tits up very easily, problems arose about the empty seats and staffing at the beginning of events, but they all seem to have been swept to one side as Gold medal after Gold medal dropped around the necks of Jessica Ennis and Chris Hoy and we could see that this was something to be proud of. Jessica Ennis especially became the poster girl for the elation that we felt when she won. There shouldn’t have been many people with dry eyes as she burst into tears seeing years of training come into fruition and achieving her dream.

If we had been shit and flew into the water like a stunned duck wrapped in bricks it would be a slightly different story. It would be a case of ‘This Is What We’ve Paid For Is It?’ and without seeming like a glory hunter, it would have affirmed all of the misleading and strongly worded rhetoric that seemed to populate the Daily Mail months before the event even started.

Who can say why the Olympics have been so popular?

What can be said for certain is that I’ve watched more sport in the last two weeks than I have in my entire life, and it’s been brilliant.

Knowing that tomorrow will be the very end of the Olympics for another four years until Rio take their turn is a bit sad. Where else will I get my regular fix of revealing lycra and sexually ambiguous divers?

Your friends would probably like to read this right?